Reasons for deviating from ideal weight

Weight can deviate from ideal both towards lack of body weight and towards its excess. Obesity development factors can be different. The deviation of body weight from the ideal can be caused by an increase in muscle mass, for example, in athletes, and a decrease in weight in various diseases. But the most common cause of both overweight and underweight is a violation of the so-called eating behavior. The most common form of body weight deviation from normal is obesity. A large change in weight cannot be fully justified by a change in diet.

Adipose tissue plays an important role in energy metabolism: it contributes to the accumulation of excess energy in the form of fatty acids, which are formed under the action of insulin. With increased energy consumption, fatty acids are decomposed and converted into glucose, which the body’s cells are able to use as “Fuel”.

Adipose tissue, like a fur coat, prevents the release of heat into the environment, and with obesity, the process of heat production is disrupted (Fig. 1). The body spends less energy to maintain a constant temperature, and unused calories accumulate in the form of fat, further increasing the mass of adipose tissue.

Children with only one parent being overweight have a 40% chance of inheriting obesity. For children with both obese parents, the likelihood of obesity rises to 80-90%.

The “obesity gene” is located on the X chromosome. In the nucleus of each cell of the human body there are 23 pairs of chromosomes, of which 22 pairs are the same for men and women, and the twenty-third determines the sex: in women it consists of two X chromosomes, and in men the sex chromosomes are different – X and Ү. Therefore, women are more likely to inherit a predisposition to obesity, and obesity occurs in them 2.5-3 times more often than in men.

The formation of fat cells in the fetus occurs mainly in the last trimester of pregnancy. During this period, the mass of the fetus increases threefold, and the mass of adipose tissue increases 10-15 times. Formed the so-called fat depot – the amount of fat cells, which is “written in the nature.”

Heredity plays an important role in the formation of the individual characteristics of adipose tissue.

The number of cells in the fat depot is determined by heredity – this is confirmed by studies of the frequency of obesity in parents and children. Children are born with a nose like a dad’s, mother’s eyes, grandfather’s ears – and in the same way, “by inheritance”, they receive a body type, metabolic features and an innate number of fat cells. These cells play the role of “traps” in the change in body weight: fat in them easily accumulates and is rather difficult to be excreted. The hereditary nature of the propensity to obesity is also confirmed by studies of the frequency of obesity in twins: in identical twins with the same genes, the probability of obesity is exactly the same; in fraternal twins, this probability is different, the same as in ordinary siblings.

In addition to hereditary factors, the formation of the fat depot in the fetus is primarily influenced by the nutrition of the expectant mother. Pregnancy with obesity can also affect the condition of the child. Excessive nutrition in the last trimester of pregnancy leads to an increase in the number of fat cells in the fetus – they divide intensively, increasing the volume of adipose tissue. If the expectant mother has diabetes mellitus, an excess of glucose in her body contributes to an increase in the size of the fat depot of the fetus. But if during pregnancy the mother’s diabetes is compensated for and the blood glucose level is maintained at a normal level, the likelihood of obesity in the unborn child is much reduced.

Excessive development of the fat depot can be avoided by reducing the volume and energy value of a pregnant woman’s food to normal. Nutrition in the last trimester of pregnancy requires special attention, when adipose tissue cells are being laid.

Obesity treatment in children and adolescents

The prenatal period and childhood play an important role in the formation of a person’s body weight. 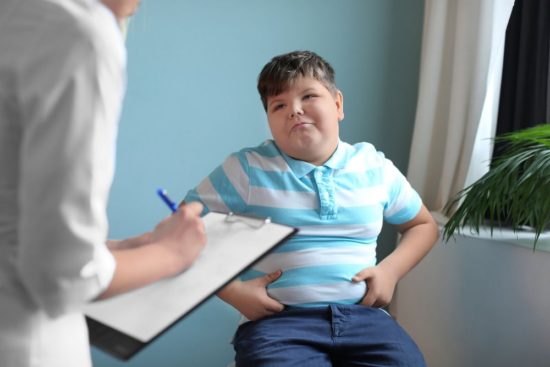 In addition to normal adipose tissue, newborns also have so-called brown fat. The volume of brown world tissue in a newborn child is about 30 g, that is, about 1% of body weight. Already at 13-14 weeks of intrauterine development, brown fat begins to accumulate more intensively than white. In the first months of life, the thermoregulatory system, like many other physiological systems of the body, is just being formed, and the brown adipose tissue plays the role of an “internal heating pad”. Brown fat is especially abundant near the vital organs – between the shoulder blades, under the armpits and in the groin. It surrounds the heart, thyroid and thymus glands, esophagus, kidneys, intestines, and large blood vessels. If the child is cold, fatty acids are rapidly oxidized in this tissue to generate heat, due to which the surrounding tissues and the blood of nearby vessels are heated.

The increase in the number of cells in the first years of life occurs most intensively. The peak of the increase in the amount of fat, especially subcutaneous fat, occurs in the first nine months. By the age of three, there are already four times more fat cells in the baby’s body than there were at birth. Not only the number of cells increases, but also their size. Despite this, newborn obesity is quite rare.

The amount of fat in a child’s body depends on gender: newborn girls have more total and subcutaneous fat.

The factors that determine the number of fat cells in the body are the level of nutrition and the secretion of growth hormone. Excessive nutrition stimulates excessive multiplication of fat cells, and restriction of nutrition inhibits it, during periods of intensive growth, the body is “not up to fat” – first of all, it spends energy on the formation of bone and muscle tissue. Fat cells in healthy children decrease in size during rapid growth, so there is no need to worry if the child simultaneously stretches in length and loses weight.

During the first year of life, both the size of fat cells and their number grow rapidly. Further, until about six years of age, an increase in the size of fat cells occurs more intensively: in a healthy six-year-old child, fat cells are 3 times larger than in a newborn. Fat cells continue to increase in number and size little by little until puberty. The mass of adipose tissue grows more slowly than before, but constantly. In healthy children, the number of fat cells becomes the same as in adults by about twelve years of age.

In obese children, already in the second year of life, fat cells grow to the same size as in non-obese adults. The intensive growth of fat cells continues until the age of six, and by this age they become larger than in an adult, which is the reason for overweight.

By the age of 6, among children who have experienced a significant change in weight, two subgroups are distinguished. The first includes children with a significant increase in the number of fat cells that exceeds the level that is normal for an adult, and the second includes children with a moderate increase in the number of cells for a given age, not exceeding the level of an adult. The sizes of the fat cells themselves in children from the second group are much larger than normal for their age.

Fat cell division in healthy children continues until the onset of puberty. After that, throughout life, the number of fat cells usually does not increase or decrease, and changes in fat mass occur only due to an increase and decrease in the size of fat cells.

The number of fat cells in adult men and women is the same. The difference in the amount of fat between male and female organisms is determined only by the size of fat cells: in women, they are larger.

The size of the fat cells depends on which part of the body they are located in. In the area of ​​the anterior abdominal wall, buttocks, face, fat cells are larger than in the subcutaneous fatty tissue of the back and extremities. 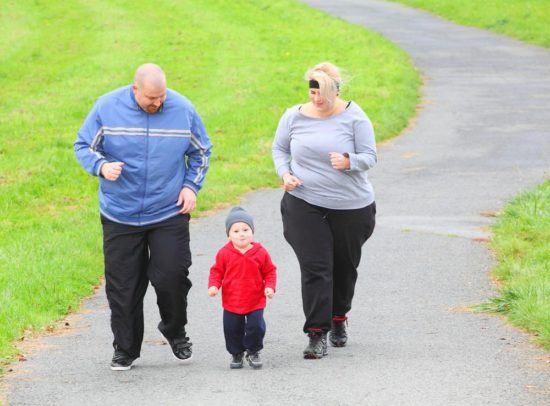 If an excess amount of fat cells is formed in the body “by nature”, this very often becomes the cause of excess body weight. This hyperplastic form of obesity is particularly stable; with it, it is much more difficult to fight overweight.

But even if there are naturally few cells in adipose tissue, this does not always interfere with the accumulation of excess body weight: fat cells are able to increase in size. The deposition of large amounts of fat by increasing the size of fat cells is called hypertrophic obesity. Fighting overweight with this type of obesity is somewhat easier.

Recall that we are talking here about simple obesity – alimentary, that is, caused by excess nutrition (from the same Latin root comes the word “alimony”). Complex forms of obesity arise from disorders in the endocrine glands or central nervous system.

In an adult, the mass of adipose tissue in most cases can only grow in a hypertrophic type – due to an increase in cell size. The division (and, accordingly, an increase in the number) of fat cells in adults is possible only with a very severe form of obesity. At the same time, the cells reach their maximum size, and the body weight can be twice or more than the ideal one. Changes in body weight are most often manifested already in childhood and even before birth.