The very term “macrobiotics” means “longevity”. It was introduced in 1852 by the German physician H. Gufland. Macrobiotics is the teaching of spiritual, mental and physical health that determines longevity.

To make it easier to understand what macrobiotics studies, consider the history of its creation. In 1883, S. Ishezuki’s book “Eastern Nutrition and Longevity” was published in Japan, which laid the foundation for the development of the theory and practice of the teachings “Zen-macrobiotics”. Macrobiotic nutrition is based on the philosophical and religious teachings of Zen Buddhism, ancient Eastern medical and philosophical concepts of vitality in the Yin-Yang system and Japanese national nutritional traditions. Macrobiotics studies not only nutrition, it is based on the practical doctrine of the application of the principles of Eastern philosophy in everyday life.

The founder of modern macrobiotics is the Japanese philosopher and physician George Osawa. The impetus for its creation was the tragic events in his family. Osawa’s mother died at the age of thirty, his two sisters and his younger brother died. At the age of 18, Osawa himself fell ill with tuberculosis. He associated this with the penetration of Western civilization into his family with an unusual food system. This prompted him to take care of his own health and analyze the nutritional system of his ancestors. On the basis of oriental medicine, a modern nutrition system was created – macrobiotics, Osawa put a lot of effort into this.

In the West, macrobiotics became famous in the mid-1960s, after Osawa’s students gave a course in Boston on the basics of macrobiotics. In Boston, a store was opened selling so-called natural products: seaweed, azuki beans, tamari soy sauce. To A. Kushi, a disciple of Osawa, people began to come from all over America to learn about macrobiotic nutrition. The House of Kushi, a boarding school, was opened. In it, students lived as family members and learned the principles of macrobiotics. The course of study lasted from 6 months to one year.

In the United States, schools for teaching Zen macrobiotics, treatment centers, cafes, shops were opened, the Kushi Institute was organized, which published three periodicals on macrobiotic problems. A. Kushi and his American follower Wendy Esco have a number of books on various aspects of macrobiotic nutrition, cooking and lifestyle. Esko wrote in her book “Introduction to Macrobiotic Cooking”: “Macrobiotics is not only a different way of cooking, it is a way of life.”

The concepts of “Yin” and “Yang”

The concept of health and disease in macrobiotics is based on the ancient Chinese theory, according to which everything in the world consists of two principles – Yin and Yang. Everything in the world is the interaction and struggle of opposites Yin and Yang. Yin and Yang always and everywhere exist simultaneously, they do not meet “in pure form”, and each element contains a particle of its opposite. This can be seen in the symbol that has come down to us from antiquity, depicting the unity of Yin and Yang.

Yin is a centrifugal force, it expands, it is a source of calmness, coldness, silence. Yin qualities carry the night, winter, and the moon. Yin includes such concepts as weak, slow, passive, light, soft, cold, moist, sour, spicy, sweet, purple.

Yang is a centripetal force. It lowers, produces sound, heat, light. Light, sun, day, heat and summer all carry the qualities of Yang.

The organs are also divided according to the Yin and Yang system. Yin includes the heart, lungs, liver, kidneys, and spleen. K Yang – stomach, intestines, gallbladder and bladder. The left side of the body is Yang, the right side is Yin. The distribution of Yin and Yang in some objects and phenomena is presented as follows:

The life force, which in Indian philosophy is called prona, in Chinese – qi, in Japanese – ki, changes depending on the season: Yang increases in summer, Yin – in winter. Accordingly, the energy of the organs related to Yin or Yang, during the year either strengthens or weakens. During the day, each organ has its own peak of activity: 11-13 hours for the heart, 13-15 hours for the small intestine, 15-17 hours for the bladder. When the Yin organs are activated, the Yang organs are inhibited. Yin and Yang are opposites that merge into each other. Thus, in the cold countries of Yin, plants grow and animals of Yang live; plants and animals from warm Yang countries are Yin. A woman (Yin) produces an egg (Yang), and a man (Yang) produces a sperm cell (Yin).

Yin and yang imbalance is at the heart of diagnosis, treatment, and nutrition. In Zen Buddhism, food is viewed not only as a source of sustaining life, but as a source of spiritual achievement. The diet in Zen monasteries in Japan was literally called “cuisine that improves judgment.” In monasteries, while plates are being set and food is being served, the monks indulge in “five thoughts on food”:

And reflections are reflected in Zen macrobiotics. Eating well is a way to win happiness and peace. 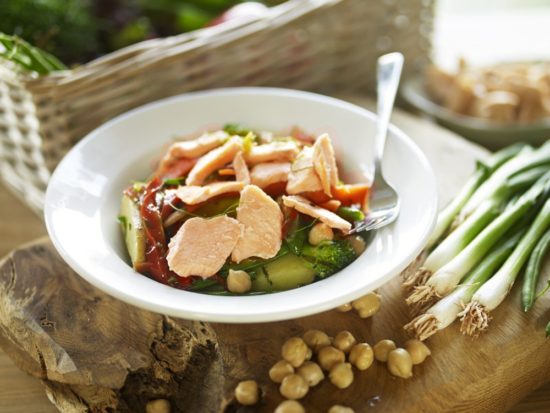 Since the food in Buddhist monasteries was only vegetable with a predominance of a narrow food set: rice, barley, vegetables, soybeans and other beans, this was reflected in macrobiotics.

George Osawa divided the food into “main” and “additional” in accordance with the Japanese national nutritional traditions.

The staple foods of traditional Japanese cuisine are rice and grains, and the rest of the foods are considered an addition to them. Radish occupies an important place among vegetables. It is consumed raw, boiled and fermented. The source of animal food is mainly fish and seafood. Eggs, poultry, meat are rarely used in traditional cuisine.

After World War II, under the influence of American culture, the Japanese introduced milk into their diet, dairy products that were previously absent in their diet, and increased their meat consumption. This contributed to an increase in the growth of the Japanese by an average of 13-14 cm and coincided with an increase in their life expectancy. Of course, not only nutrition determined these shifts, but its influence should not be ignored either.